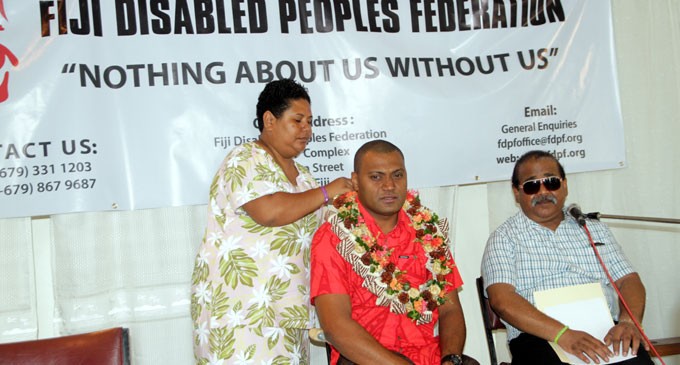 March 29
Iliesa Delana being garlanded during the closing of the Fiji Disabled People’s Federation annual general meeting at the Salvation Army hall yesterday.
People with disabilities face many barriers everyday – from physical obstacles in buildings to systemic barriers in employment and civic life.

The comments were made by the Assistant Minister for Youth and Sports Iliesa Delana during the closure of the annual general meeting of the Fiji Disabled People’s Federation yesterday at the Salvation Army Hall at Raiwai, Suva.

Mr Delana assured participants that Government had been working hard in advocating equality and the removal of barriers against people with disabilities.

“Whether born from ignorance, fear, misunderstanding or hate, these attitudes keep people from appreciating – and experiencing – the full potential a person with a disability can achieve”

He said the most pervasive negative attitude was focusing on a person’s disability rather than on an individual’s abilities.

“The insidious attitude is that society doesn’t expect people with disabilities to perform up to standard, or able to do any task better than those without disabilities do.

“It is belittling and has the effect of patronising people with disabilities.”

He encouraged the executives and also disabled colleagues to be persistent in their fight against stigma against people with disabilities at every level of the community, complemented by advocacy efforts.

“I urge you all to be bold and step out into the world and get involved in the normal everyday life. You are special and you can do just as well as others and maybe even better,” he said.

Meanwhile the Federation also announced its board members with Rakesh Chand reprising its role as the president.